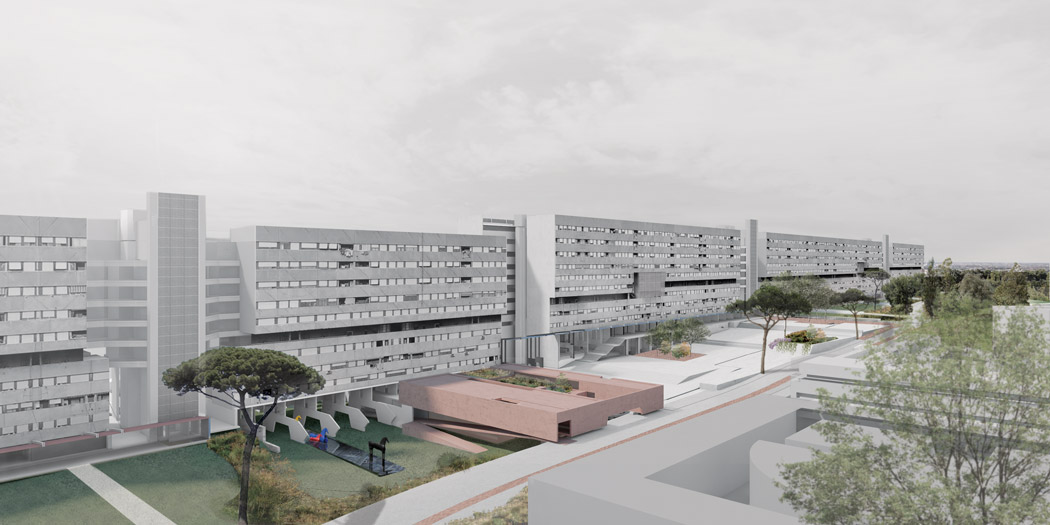 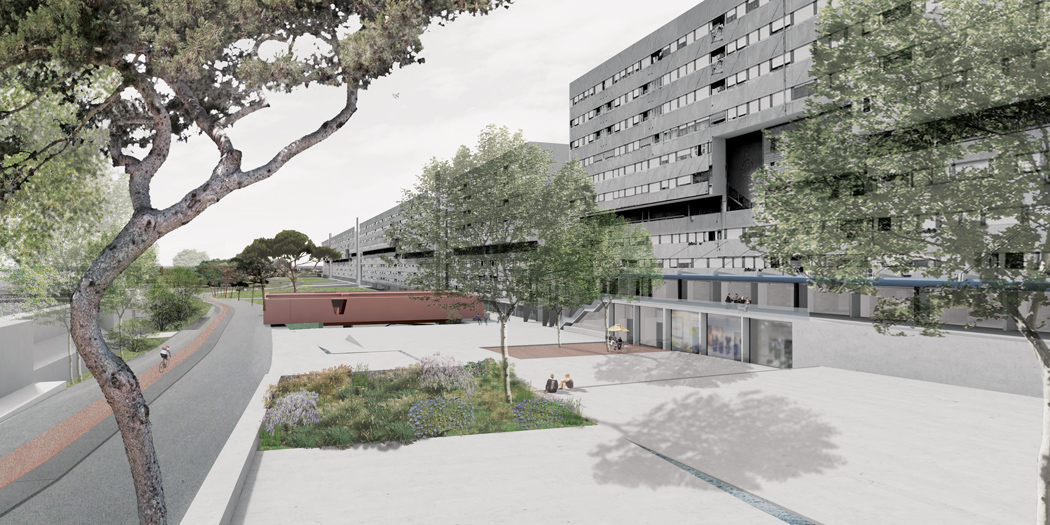 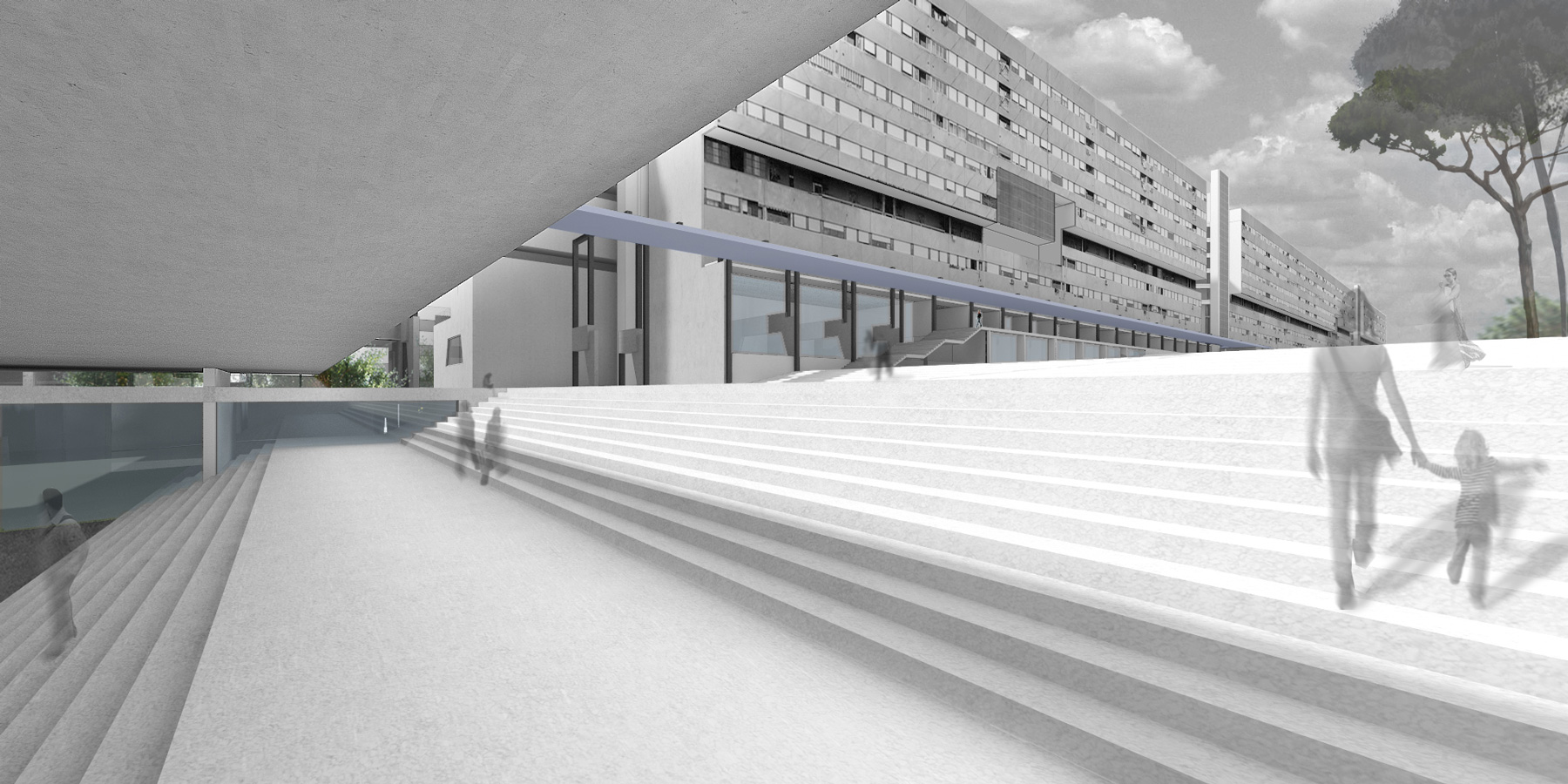 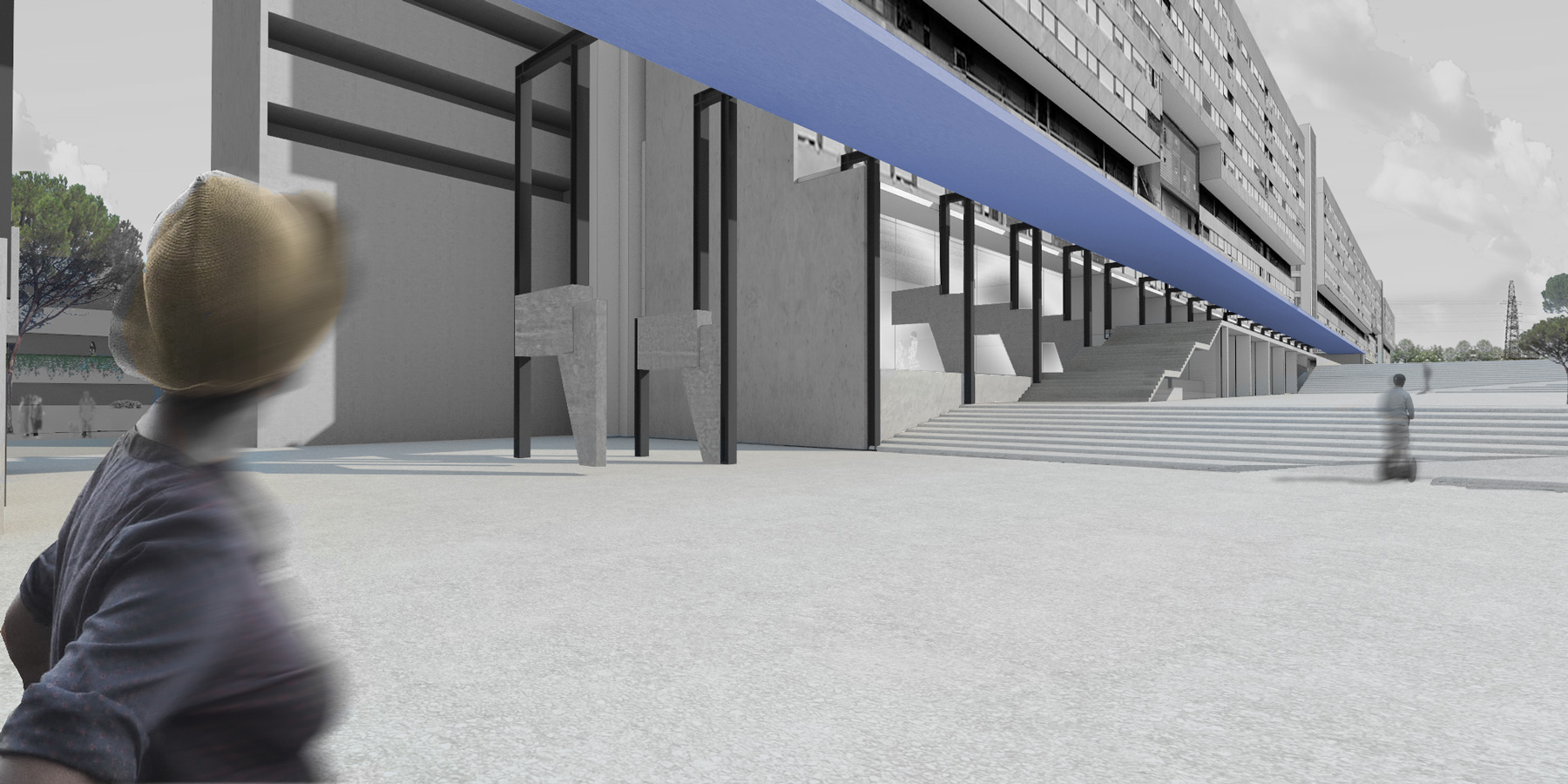 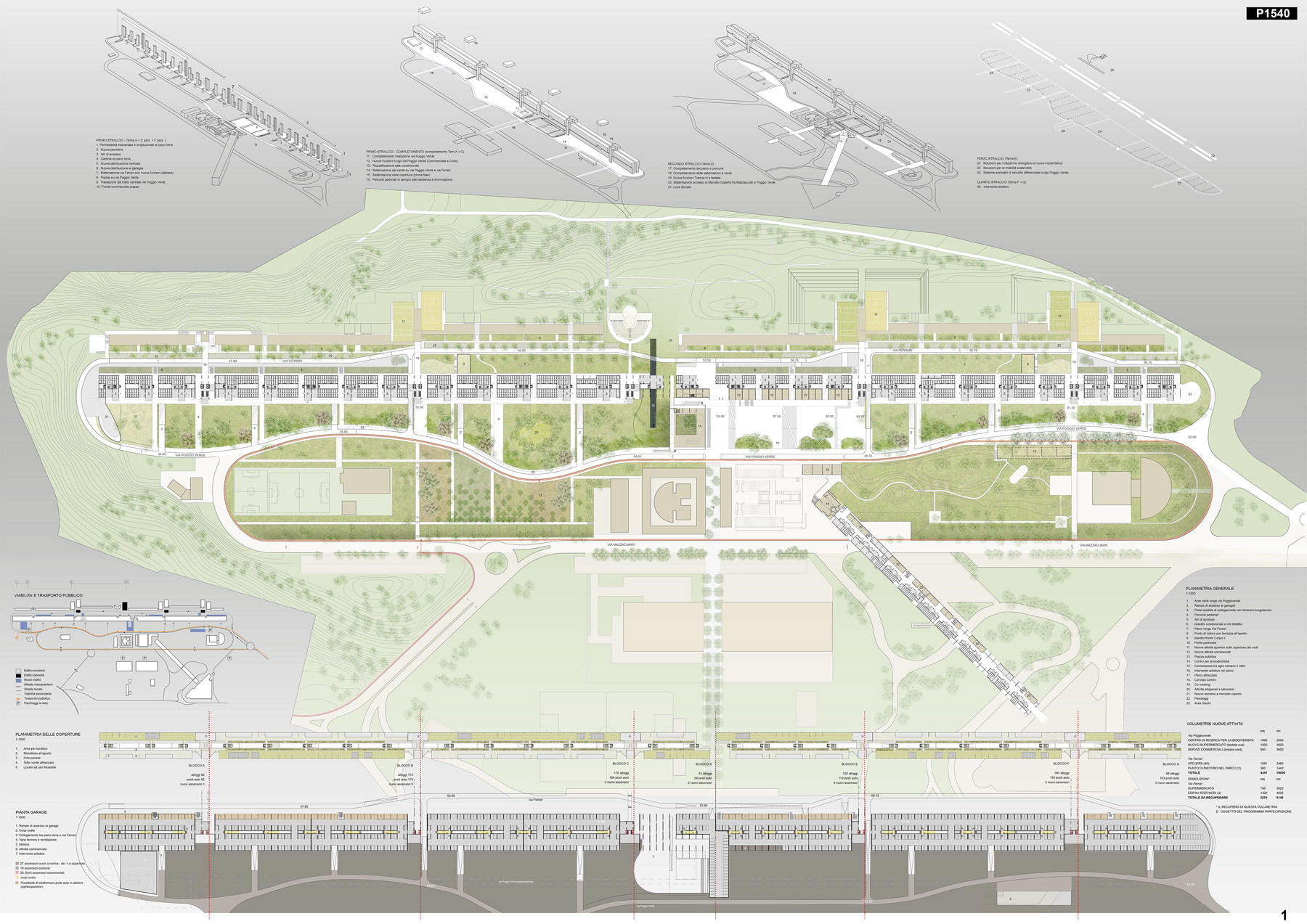 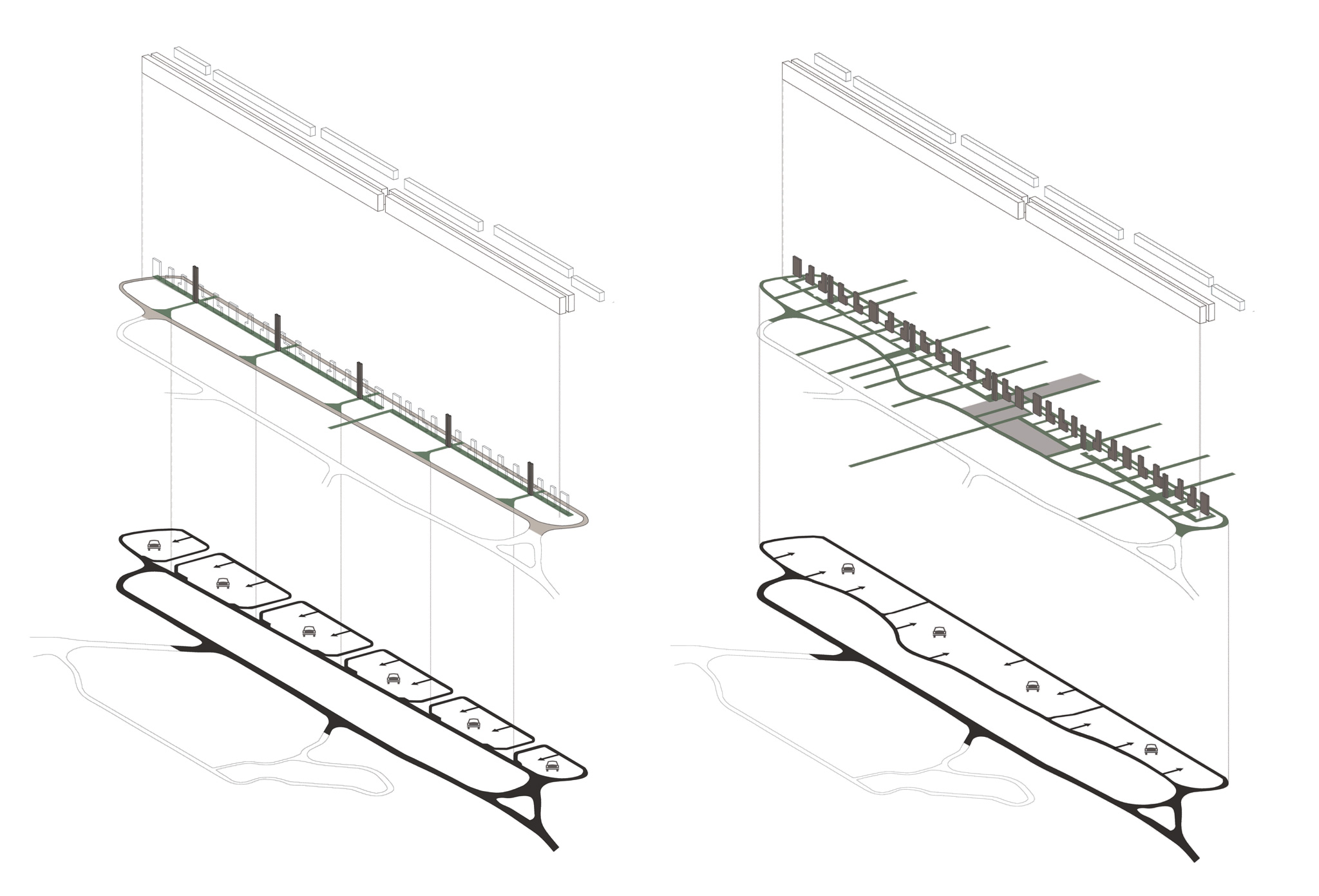 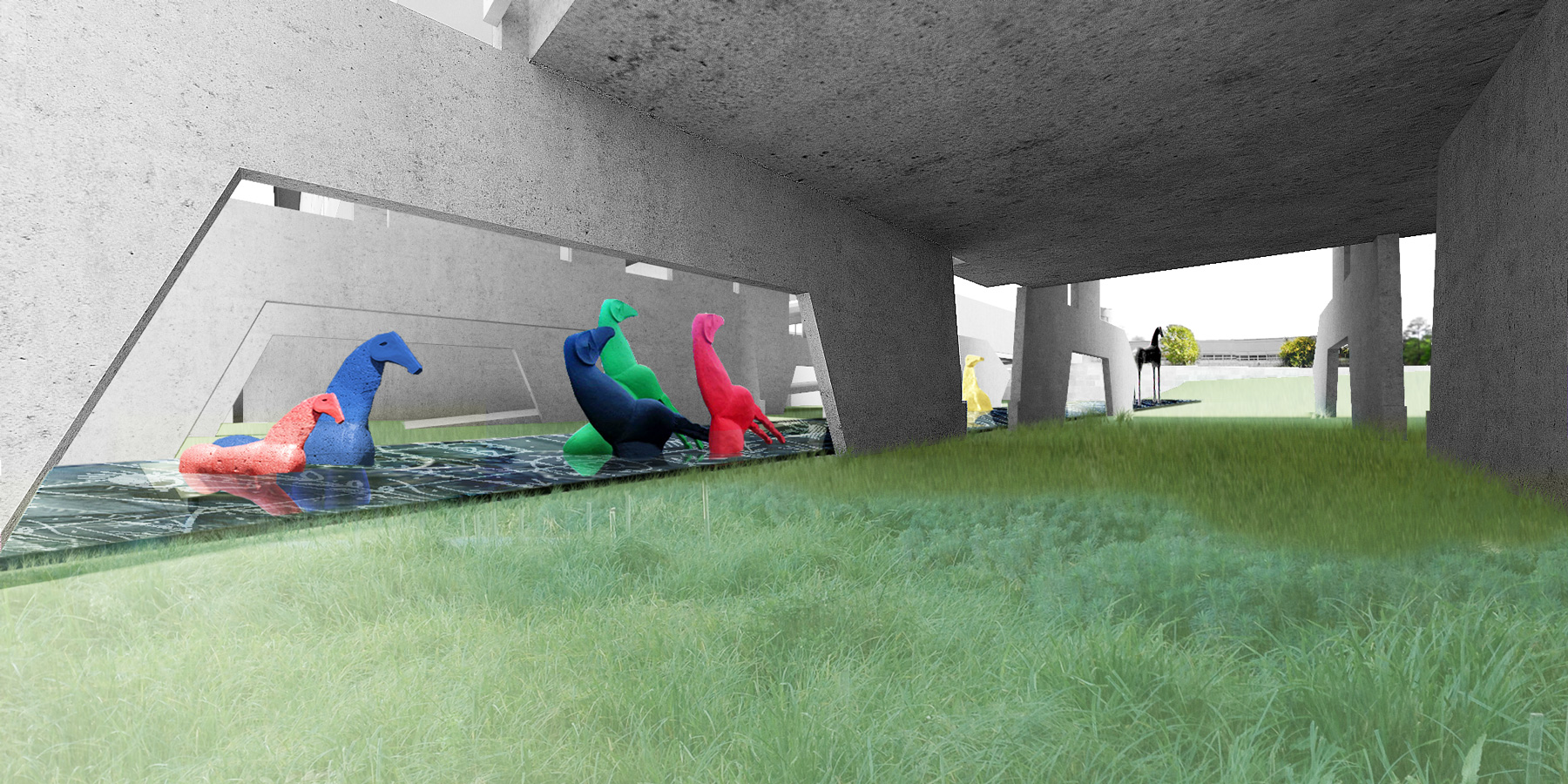 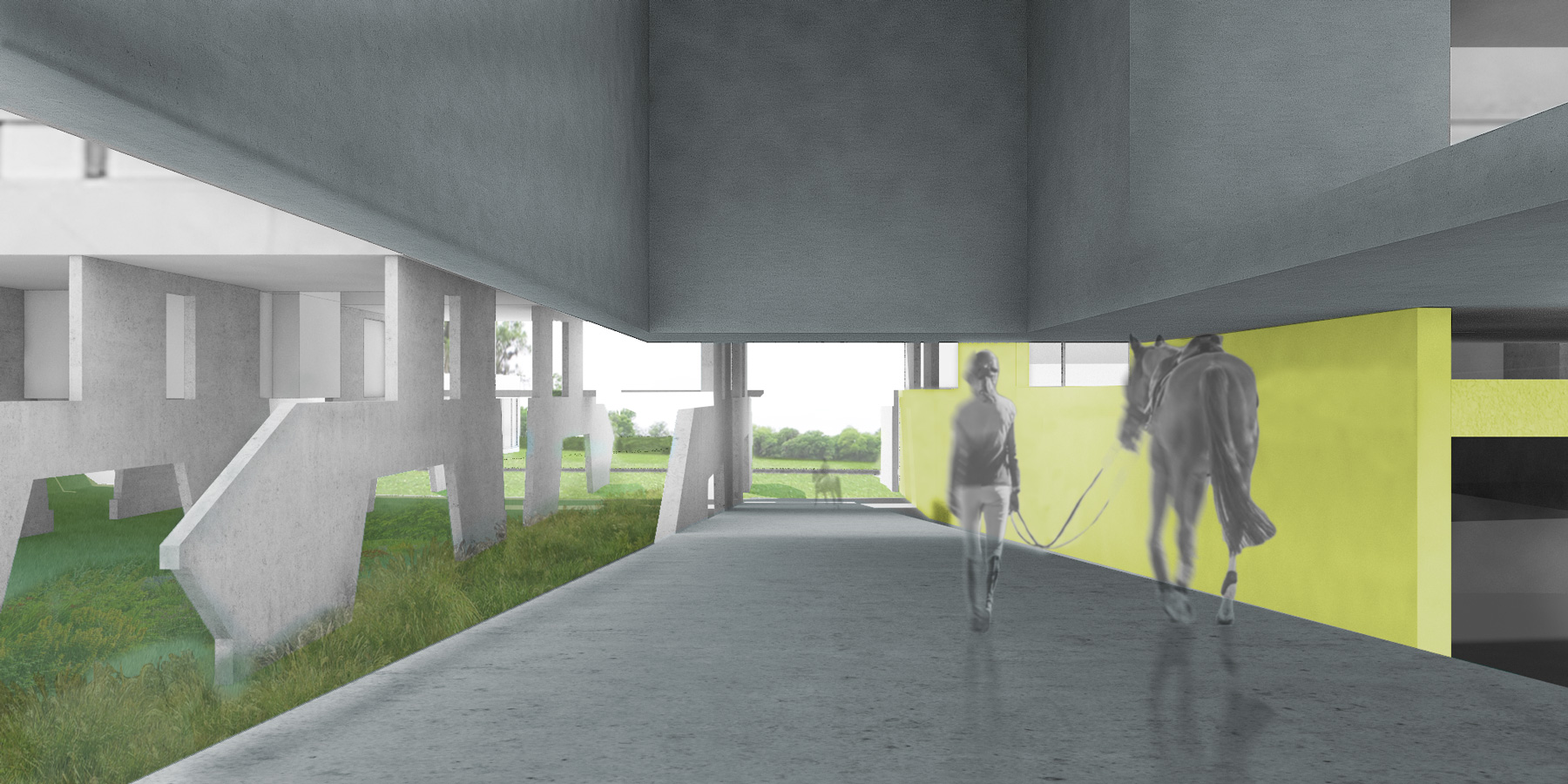 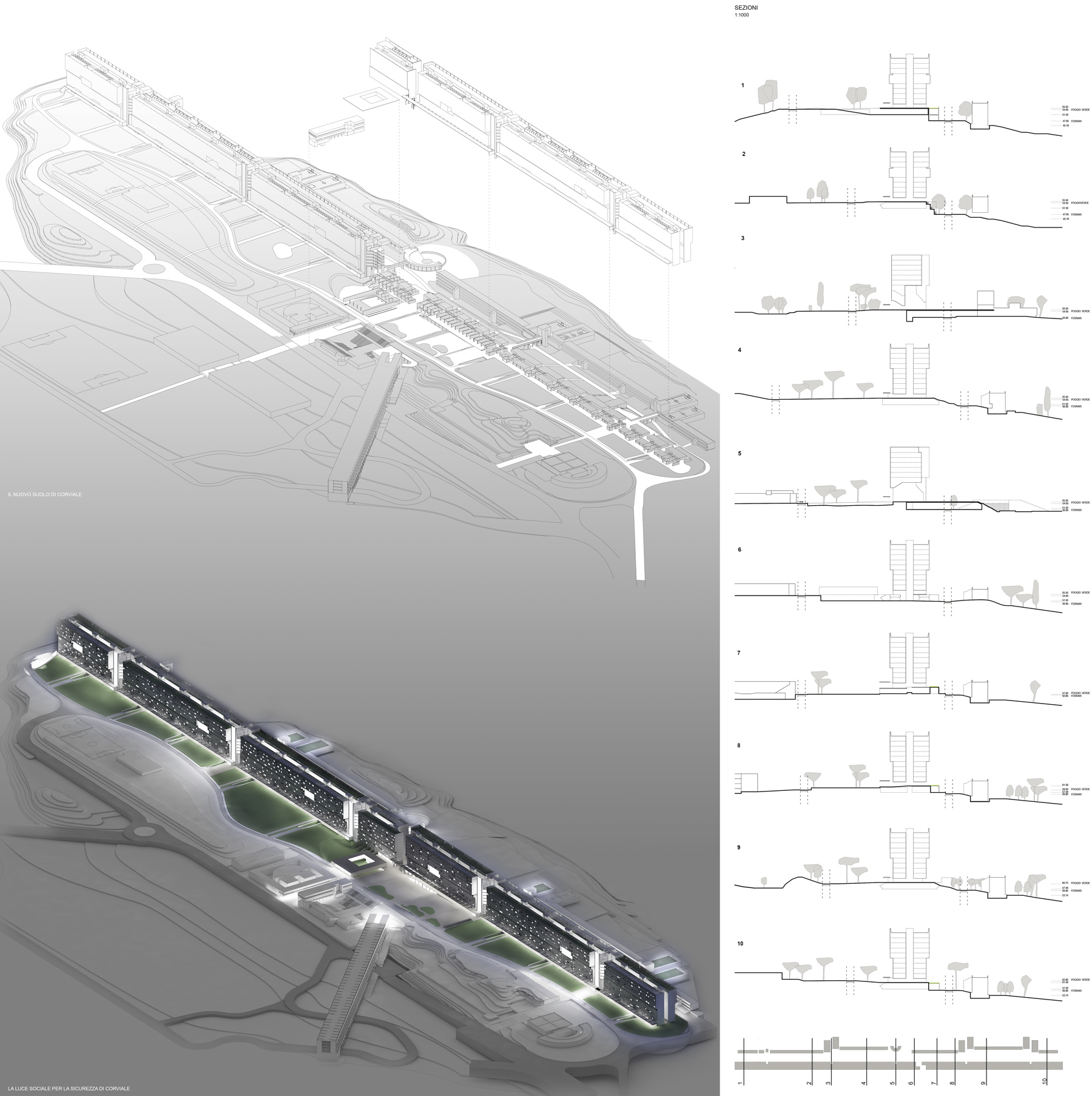 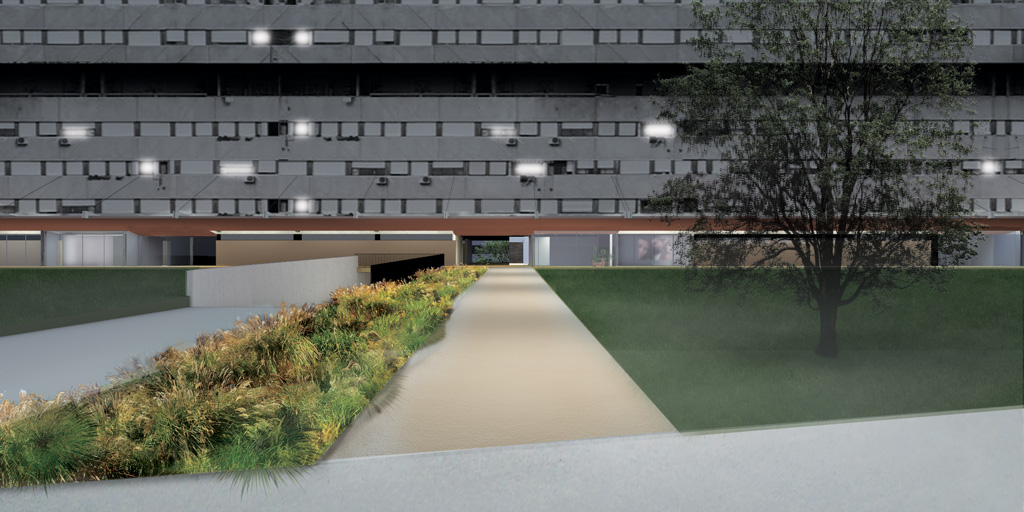 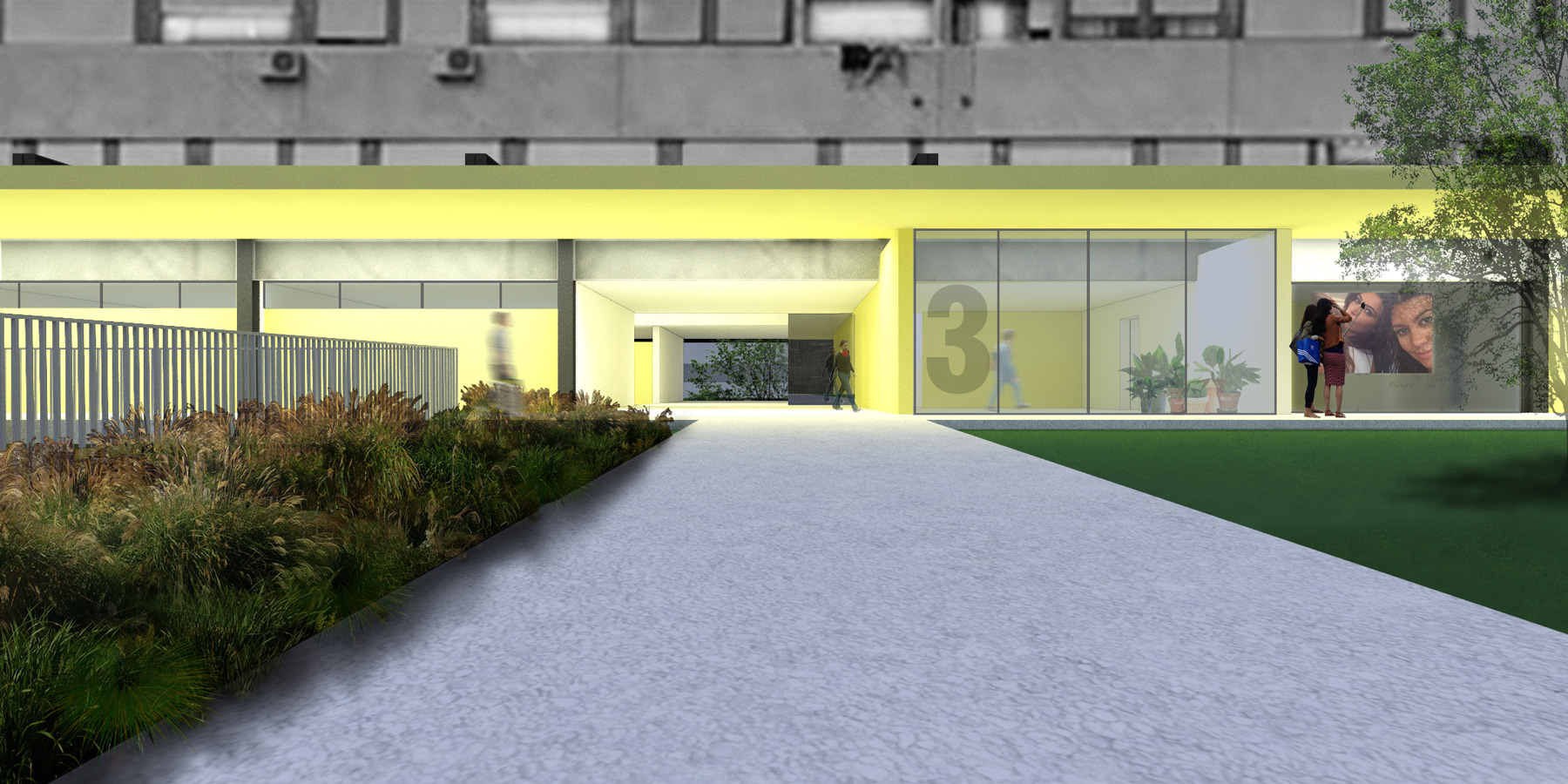 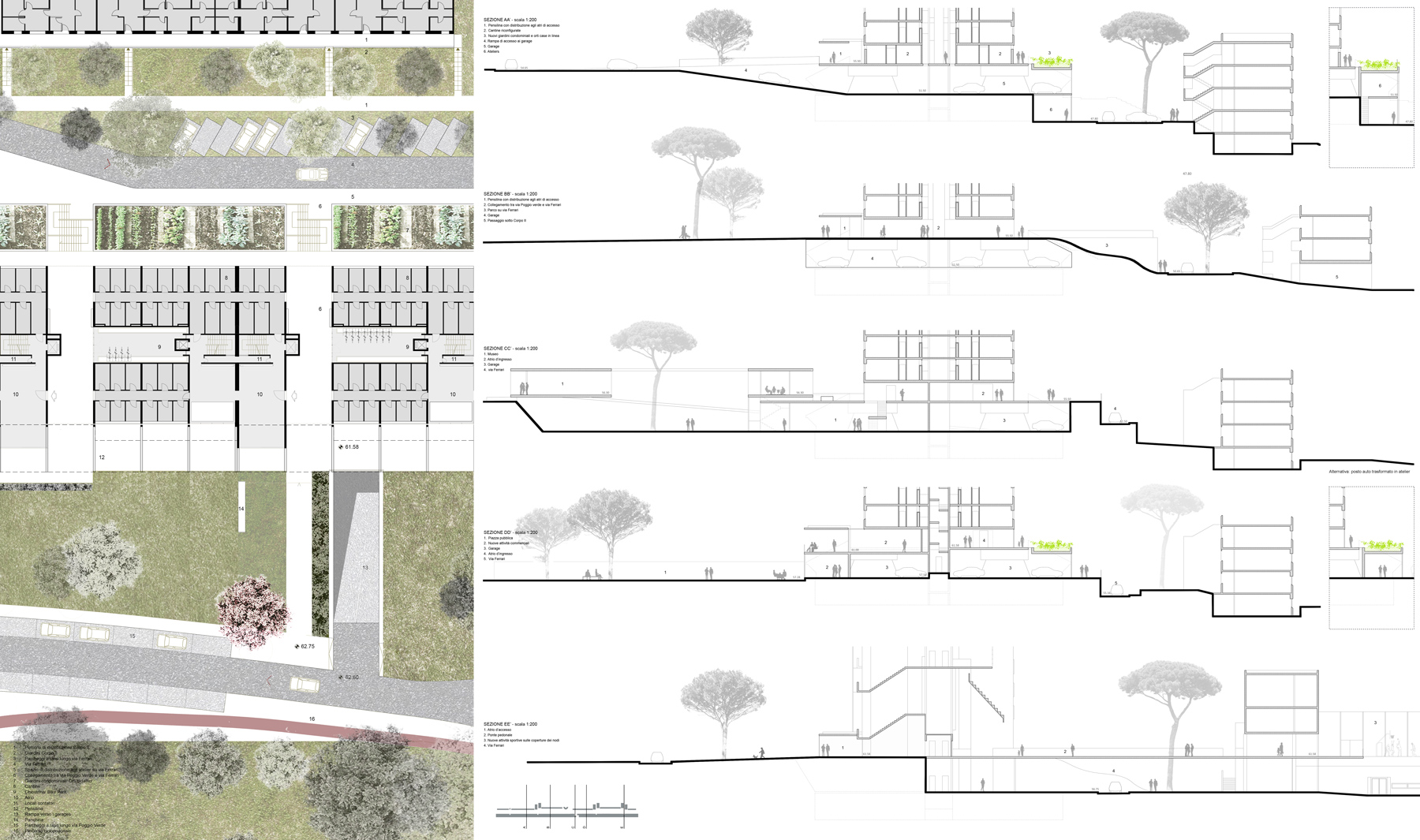 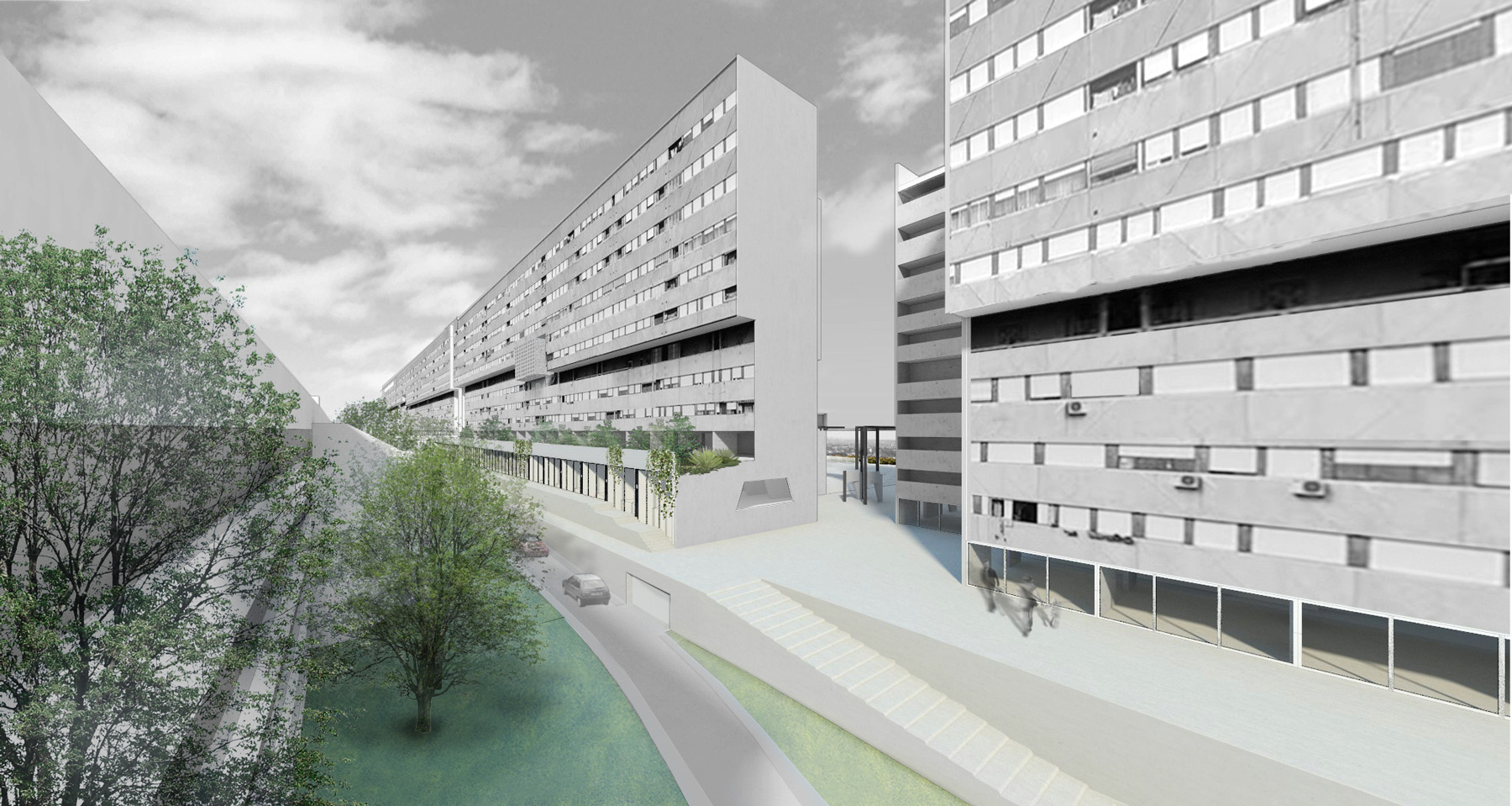 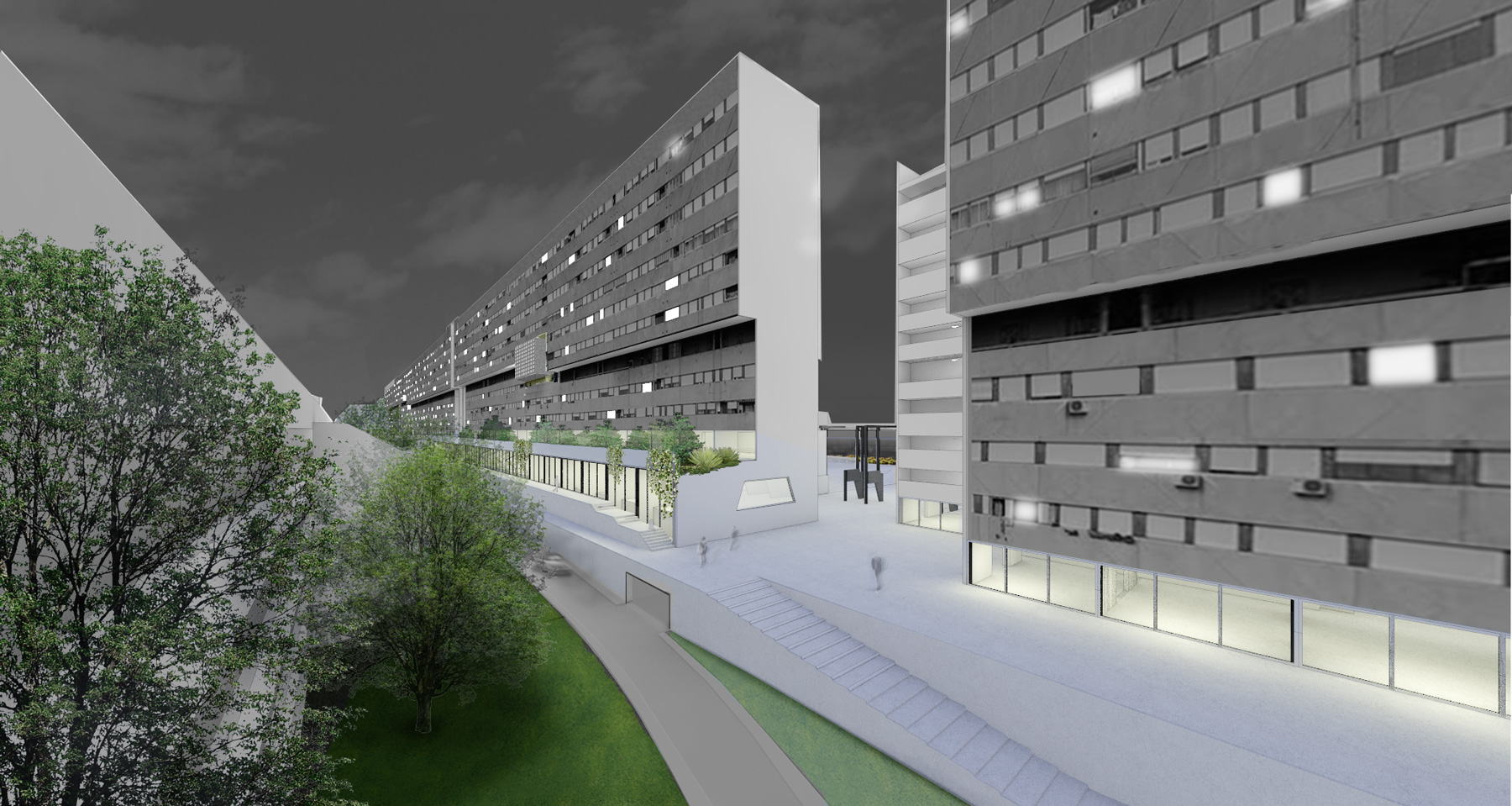 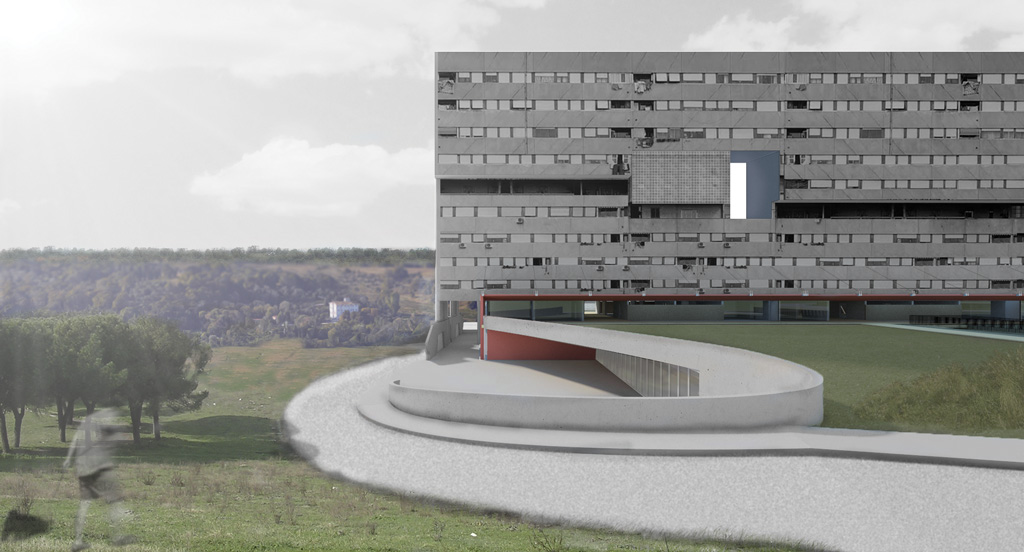 Corviale form a unique model of high population density. It was conceived as an autonomous and self-sufficient project to protect the surrounding area against the indiscriminate use of land, typical of urban sprawl. Despite this quality and despite its being a piece of iconic architecture and ideal, the decay of the buildings, incompleteness of the complex and a general condition of disorientation and alienation linked to some typological matters hasn’t made possible, over the years, the development of meaningful relationships with the direct surroundings and with that more extended. On the other hand the very rich and specific condition of Corviale offer great opportunities for transformation without obscuring the essence, the symbolic connotations and its ability to be city.

A territorial threshold between town and countryside
The proposed project aims to reconstitute, at various scales, a clear system of relationships between public spaces and circulation – “from the territory to the landing” – recovering the original intention of setting up a “piece of the city”, especially at the intermediate scale of city.

In this sense, a geographical condition is reconstituted in which the whole of Corviale appears as a built condensation that interpret, in the ground floor, the original topography of an area where the altitude changes progressively and continuously, without tears, with fluid and articulated paths – as in the processes of forming historic cities that metabolized naturally and economically each corrugation of the soil.

The project interprets a systematic sequence of cross-sections over the ridge, to consider the thickness of the intervention that varies between 70 and 200 meters (and therefore not only the 37 meters of the mere ground floor of Corviale. This “territorial scanner” identifies the main crossings in the punctual permeability along the kilometer.

A “low” crossing of the main building at the altitude +51.50, approximately in correspondence with the building D: elimination of functions at the ground floor, including the demolition of the supermarket behind the main building, connects Corviale to the countryside; (see section just below the images of the artistic intervention).
One crossing of the intermediate portion, altitude +55.50, that intercept the current change of altitude of 6 meters between the blocks D and E, changing from “fracture” in “zipper” with the bridging building intended for a Center for Biodiversity Research.
One “high” crossing, at +61.58, corresponding to the Node EF, links also to the path onto which the shops overlook.
The rigid layout of vehicular routes, that today cages Corviale segmenting it into longitudinal strips separated from each other, is thought through to fit also pedestrians; It proposes a sequence of approaches, crossing the building that makes finally able to filter, sort, orient and re-open to other perspectives.

To loosen the “stranglehold” a more fluid system for vehicles is proposed: a new continuous landscape circle, in a one-way format going along via Ferrari and via Poggio Verde, going clockwise with two crossovers in two-way traffic, crossing the building in at the two service nodes BC and EF.

Along via Poggio Verde
The via Poggio Verde streets is moved, changing the layout from a straight road into a curvilinear one, a road that bends generating narrower or wider green spaces, thus producing a system of spatial differences that characterizes the public space and designs the park while one goes along to arrive to the entrances.

This shift also introduces an intermediate scale, marked by the public park that opens up the the ground floor of Corviale to the outside: the area in front of Corviale hosts the ramps to the garages, gardens, playgrounds, residence’s new footpaths, an artistic intervention. At Corviale Centro there is a large square that slopes from +61.58 to +51.50, furnished by the shops and restaurant activities.

Main event and as a public space refurbishing everyday life, the square intercepts the gap that exists in Block D and turns it into a proper area of transversal crossing, reconnecting the crossing path with a public terrace between the large building I and lower building II opened to the Roman countryside. Of the same proportion is also the access to the Research Centre of Biodiversity, a suspended building connected at various levels to the main dimensions of the whole complex.

Attached to Corviale for its entire length, a new outdoors footpath protected by a cantilevered roof organizes the system of accesses, enriched by new entrance halls and vertical connections retrained and updated to contemporary standards.

Along Via Ferrari
To establish a new relationship between the building I and building II with a proper neighbourhood street, the circulation rings with its accesses to the garage of the building I are eliminated (except for the ones in Block E at altitude +52.50) and in correspondence with the blocks A and B the road is lowered to obtain a continuous longitudinal section from +47.80 to +56.75. The expansion of the road section makes it possible to create a proper street, designed for a slow mobility and walkability, with the new service features.

Along the way some ground floor parking lots are extracted, to be used by the tenants in the building II. The side close to the main building, along the kilometer is made up of a basement system alternating artisan workshop and co-working spaces, and a slope of vegetation. This alternation of sectors mineral / vegetable / mineral offers an internal landscape variation to via Ferrari, similar to that introduced by the new via Poggio Verde. The roofs of the workshops are made of didactic gardens / orchards, intended especially for residents living in the lower apartments, currently not benefitting from any open area of relevance.

The project also provides for:
A participatory planning regarding the establishment and management of the public spaces.
An overall intervention lighting (social light).
The realization of a sustainable district in line with the smart building and smart city approaches.
Intelligent systems to increase the efficiency, safety and quality of Corviale.
Energy efficiency of the new functions through photovoltaic roofing in Corviale.
Efficiency of vertical connections.
Efficient lighting (LED) and systems of management and control for public lighting.
Recovery of rainwater to irrigate green areas